If you are present in the world of beauty/cosmetics social media then you know Jeffree Star is really hot right now with all his products. 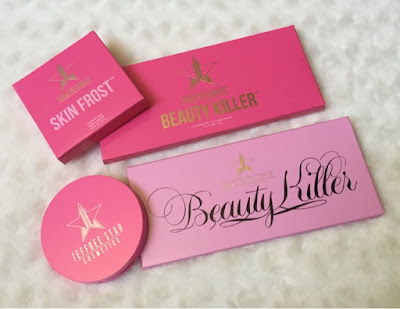 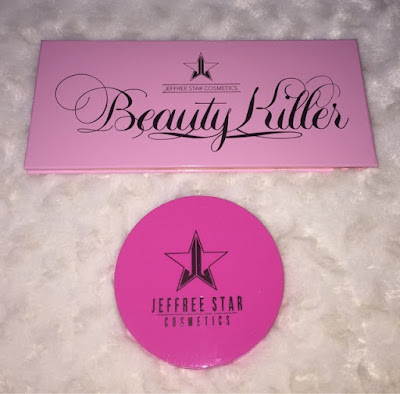 He just recently launched an eyeshadow palette and four highlighters.

I ordered the Beauty Killer palette and the Skin Frost Highlighter in Ice Cold. 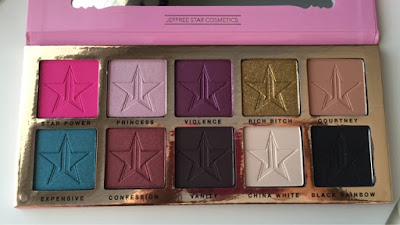 The palette features ten eyeshadows in various finishes. Each shadow is stamped with the Jeffree Star logo which I think is cute. 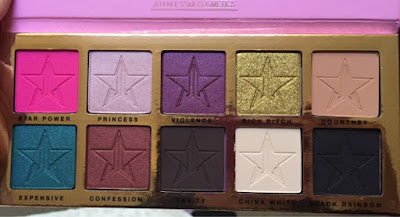 When I saw the first glimpse of the eyeshadow palette I knew I was going to order it.

While some might look at it and see an unwearable palette of bright shadows I see a palette featuring neutral shades and bright pops of accent color. 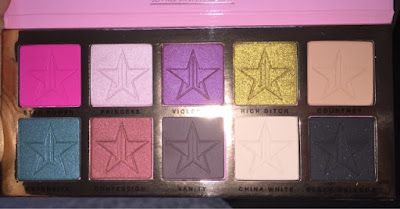 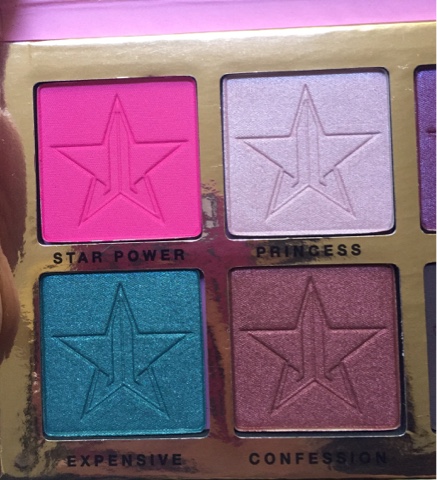 Close up of Star Power, Princess, Expensive, and Confession.

Star Power is a matte bright pink. This one is a bit chalky and dry feeling. It's a little patchy but it does build up evenly.

Princess is a pale shimmery baby pink. This one is not so chalky but the pigmentation is lacking.

Expensive is a glittery teal. This one has a nicer texture. It's very pigmented and smooth.

Confession is my favorite of the whole palette. It's warm burnt rust color. It also has some shimmer in it but not glitter. The pigmentation on this shade is great. It applies opaque and smooth. I love it!! 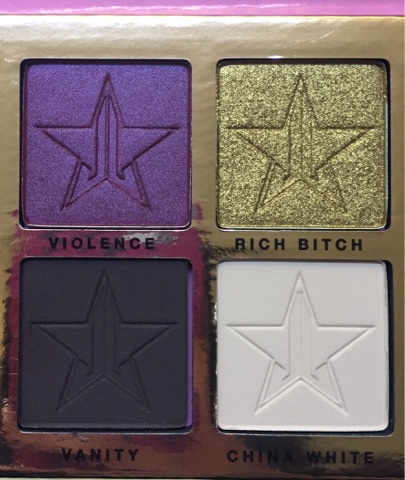 Violence is a shimmery plum violet. While I love the shade the pigmentation isn't the best. It doesn't adhere well to my lids. Something about the texture of this shadow is just off. I do use a primer and have tried using it with various primers but it still under performs.

Rich Bitch is a intense metallic gold. I had really high hopes for this one but it was an extreme disappointment. The texture of this is smooth but patchy and if you swatch it it looks pretty, but that doesn't translate to the eyes. This shade wouldn't adhere to my eyes either. It was very crumbly and odd to work with. The shadow that did adhere was very patchy.
I attempted to use this shadow again foiled (wet) and used MAC Fix + to dampen my brush. This was the ugliest foiled shadow I've ever used. I can't lie but it's true! It made my eyelids look like they were 70 years old! They looked so crepey! I'm not 20 but I definitely don't have crepey eyelids. It was just a very unattractive look. Also by no means am I trying to be negative towards the older generation, aging is a beautiful thing and I think something to be proud of but it just looked odd on me as I'm only 31 years old and the rest of my shadow looked smooth except for the lid area.

Vanity is a matte blackened plum. I really do like this shade. It's great for darkening the outer corner or crease. It's opaque and applied evenly.

China White is a matte cream white. I did like this one. It applied evenly. It's a great highlight and blending shade.

Close up of Courtney and Black Rainbow, one with flash so you can see the sparkles in BR.

Courtney is a matte mid tone neutral brown. It's a great transition shade. It's a little chalky but not difficult to work with. It builds up nicely.

Last we have Black Rainbow which is a dark black with rainbow micro glitters. This one is very pigmented and applies evenly. It's not patchy at all.

I did have some fallout with a few of the shadows; Violence, Rich Bitch, and Black Rainbow mostly.

I will say I do like the packaging. The palette is a standard cardboard package in a light pink shade. It's nice and slim which is great for travel.

The shadows are very large and at only $45 it's a pretty good deal. I honestly thought he was going to price this higher.

They are also vegan and cruelty free! That's always a plus! 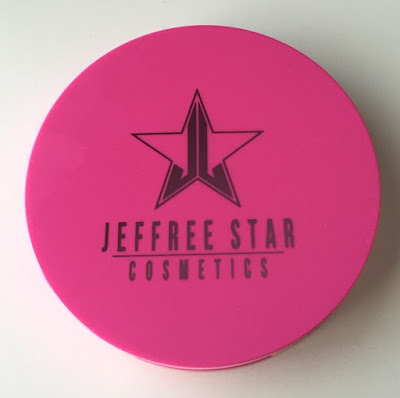 The other item I got was the Skin Frost highlighter in Ice Cold. 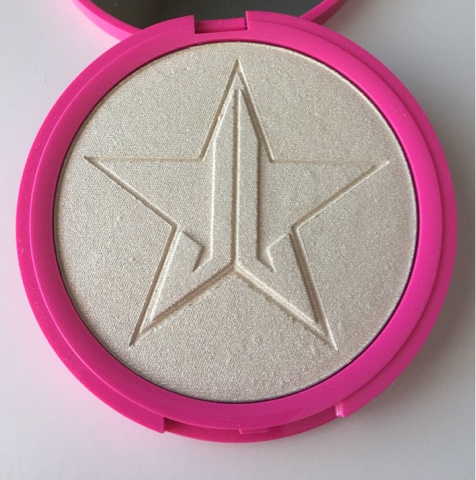 I really love the star embossing in the powder. It's a nice touch. 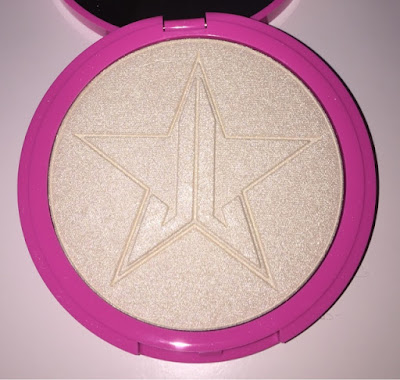 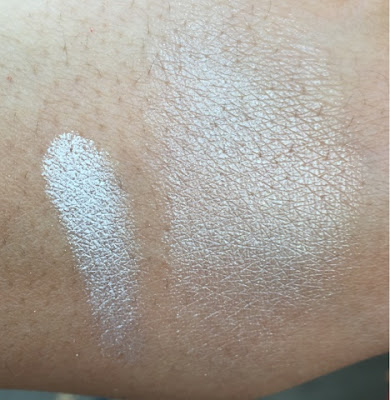 Swatch on the left and blended out on the right.

Ok so I was really excited to try this. Upon first use I grabbed my usual brush I use for highlight. I usually use a larger fluffy tapered brush from Sonia Kashuk. It works perfectly for every other highlighter I use but it was not happening for the Skin Frost.

The product is very pigmented. It's very creamy in texture even though it's a powder. The texture feels like it's a pressed pigment.

So when I first used that brush it applied way to much and I had a giant white stripe across my cheek that I was forever trying to blend out.

Of course this was my fault for not choosing a better brush but after some time blending it out it looked fine. Then I decided to look at my face in bright artificial light and my cheek area look so bad! I don't really have many skin issues, besides an occasional pimple but my skin looked very textured and bumpy. I also could see that rather than my skin looking glowy, it looked like I dumped  micro glitter all over my cheeks. I am all for a little sparkle and shimmer but this looked a bit to chunky of a shimmer which was giving my skin that textured look.

I have used this again several times and have used smaller brushes which I think works better. I also used a light hand when picking up product and then really buffing it in to the skin.

I guess I feel like I need to be careful when using this product which seems like too much work, especially when I don't need to do that with any of my other highlighters.

The shade itself is very light/white. I would say if your very pale then this would be a great highlight for you. I would say I'm on the lighter end of medium skin tone but this looked a bit too light on me. I'll probably continue to use this with a darker highlight to really make it work for me.

The Skin Frost is packaged in a bright pink plastic which helps keep the highlight better protected.

Overall out of both the products I feel a bit disappointed. I really like Jeffree Star and I guess I just expected a lot more from his products. If you follow him on social media you can see he truly loves makeup and is a beauty junkie like the rest of us so I feel like he knows truly good makeup and I'm a little let down by what he released. These aren't terrible products just not my favorites. Of course this is just my opinion.

I do like the Beauty Killer palette more than the Skin Frost.

This is his first eye shadow and highlight launch and I'm sure he'll expand his line even more in the future and maybe work on some new formula's.

Until then I will continue to use these products but they by no means hold a candle to some of my holy grail favorites like Viseart, Inglot, Saucebox, Sugarpill and the Balm.

Did you purchases any of Jeffree's new items? What was your experience?

Posted by LipGlossGossip at 3:12 PM

LipGlossGossip
I love makeup, nail polish and bold lipstick! I love shopping and discovering new products! I also love reading and writing so I decided to start this blog. If I can write about something I love, share tips, bargains, or even help someone out then why not. Please follow if you enjoy my blog. You can email me at lipglossgossip@yahoo.com

Check out some of my favorite products!

All products reviewed on this blog are purchased by me unless otherwise noted. All reviews are my honest and personal opinion.